The World Cup Golden Boot was first officially awarded in 1982 under the name of ‘Golden Shoe’. There have been 11 different winners, with Italy, Germany and England each producing two winners. 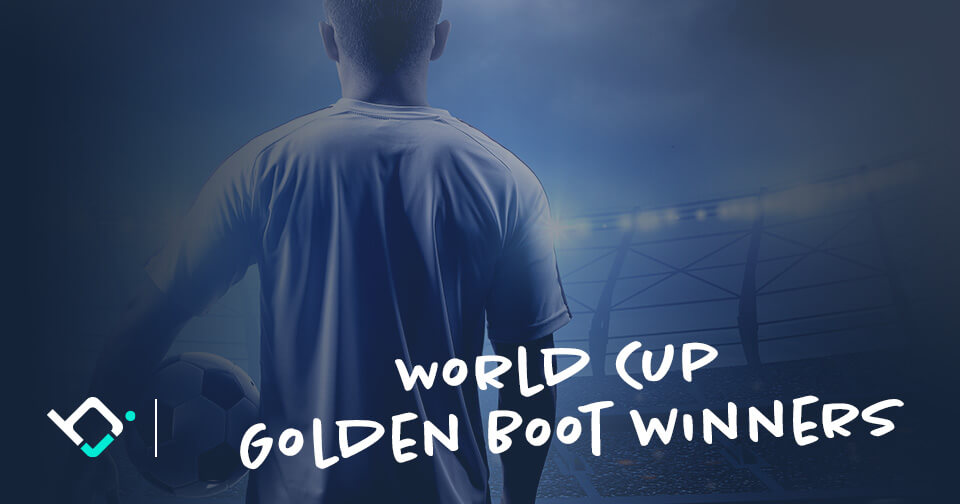 Every World Cup has a top scorers chart, but an award was first given for the leading scorer in 1982.

Following a tie in 1994 between Oleg Salenko and Hristo Stoichkov, FIFA now uses non-penalty goals as a tie-breaker before trying to split the players based on their number of assists in the tournament.

As of 2006, if the players are still level, the player who has played the least amount of time wins the award.

Here are all of the World Cup Golden Boot winners…

Italy went all the way in 1982, with Paolo Rossi scoring six goals to pip Karl-Heinz Rummenigge to the Golden Boot.

Rossi was awarded the 1982 Ballon d’Or for his efforts after also winning Serie A with Juventus in 1981-82.

Far from a flat-track bully, Rossi scored three of his six in the semi-final and final, netting a brace in a 2-0 win in the last four and scoring the opener against West Germany.

England suffered an agonising exit from the 1986 World Cup thanks to Diego Maradona’s ‘Hand Of God’.

On an individual level, though, it was a success for Gary Lineker with his six goals putting him one ahead of Maradona, Careca and Emilio Butragueño.

Lineker became the second Englishman ever to score a World Cup hat-trick. He also had a brace against Paraguay, while his sixth goal came in the defeat to Argentina.

Later that year, he was named runner-up in Ballon d’Or voting behind Igor Belanov.

Like Lineker, Salvatore Schillaci was second in Ballon d’Or voting following his six goals at the 1990 World Cup.

A goal in the third-place playoff earned Schillaci the Golden Boot ahead of Tomáš Skuhravý.

Remarkably, Schillaci only scored one other international goal after this World Cup having made his debut just weeks before the tournament.

Top scoring and winning the Golden Ball were clearly his career highlights alongside a pair of UEFA Cup wins.

Oleg Salenko made just eight appearances for Russia, three of which were at the 1994 World Cup.

All six of his international goals came at the World Cup, including five against Cameroon in the group stage.

Russia fell short of being one of the best third-placed teams and were eliminated at the group stage.

To this day, Salenko is the only player to win the Golden Shoe/Boot without playing in the knockout rounds.

Powered by Hristo Stoichkov’s six goals, Bulgaria went on a run to the semi-finals in the USA in 1994.

Among the best players in the world at the time, Stoichkov had come off a La Liga triumph with Barcelona and went on to win the 1994 Ballon d’Or ahead of Roberto Baggio and Paolo Maldini.

Once again, finishing top scorer at the World Cup led to a second-place finish in the Ballon d’Or.

Davor Šuker netted in each of the knockout matches and the third-place playoff to finish one goal ahead of Gabriel Batistuta and Christian Vieri.

Šuker continued playing for Croatia until 2002, when he played just 63 minutes at the World Cup. After which, he announced his retirement.

The highest goal total at a World Cup since 1970, Ronaldo Nazário scored eight as Brazil won in Japan and South Korea in 2002.

O Fenômeno scored the only two goals of the final and the match-winner against Turkey in the last four, while sporting that iconic half-moon haircut.

Returning to the top of his game after major injury issues, Ronaldo was unstoppable in 2002. His performances were the main factor in his second Ballon d’Or win.

Only one player scored more than three goals at the 2006 World Cup. That player was Miroslav Klose, the World Cup’s all-time leading scorer.

Of his five goals at the tournament, just one came after the group stage. He scored braces against Costa Rica and Ecuador in the opening phase, before adding a goal against Argentina in the last eight.

Klose finished his career with 71 international goals in 137 caps for Die Mannschaft.

The tournament ushered in a new era for German football as they went on a spectacular run to the semi-final, knocking out Argentina and England.

Müller was at the centre of the success, scoring twice against England and once against Argentina following his first international goal in the win over Australia.

His career has gone from strength to strength since 2010, of course, and Müller remains an integral member of the Germany team in 2022.

James Rodriguez was the breakout star of the 2014 World Cup, scoring six goals on Colombia’s route to the quarter-finals.

Among those six was the winner of the Puskas Award in Rodriguez’s brace against Uruguay, which followed goals in each of the group stage matches.

The Cúcuta native even found the net in Colombia’s last eight loss to Brazil, scoring a late penalty as Los Cafeteros lost 2-1.

Inevitably, transfer rumours accelerated after the tournament, and Rodriguez became the fourth-most expensive player of all-time weeks after the World Cup, joining Real Madrid for over £60 million.

Harry Kane followed in Gary Lineker’s footsteps to become just the second Englishman to top score at a World Cup in 2018.

The Tottenham striker finished with six goals, two more than anyone else, as England recorded their first World Cup semi-final appearance in 28 years.

A brace against Tunisia got the ball rolling for Kane. In the next match, the Three Lions hammered Panama and he joined Geoff Hurst and Lineker as England’s only World Cup hat-trick scorers.

His final goal came in the 1-1 draw with Colombia in the last 16, and he also netted a penalty in the historic shootout win that followed.