First awarded in 1982, Italy, Brazil and Argentina have produced the most World Cup Golden Ball winners with two apiece. 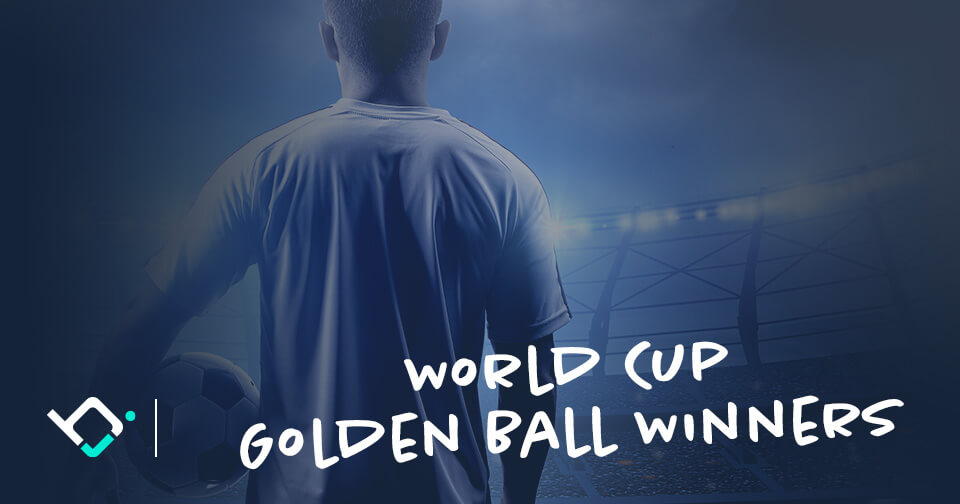 The best player at each World Cup is awarded the Golden Ball.

A shortlist is compiled by the FIFA Technical Committee, and media representatives then vote for the winner. Second and third place receive the Silver Ball and Bronze Ball respectively.

Since the award was introduced for the 1982 World Cup, seven different nations have had a Golden Ball winner, with a further six countries being represented in the top three of voting at least once.

Scorer of the opening goal in Italy’s final win and a match-deciding brace in the semi-final, Paolo Rossi won the Golden Boot and Golden Ball at the 1982 World Cup.

The Prato native was something of a World Cup specialist, with nine of his 20 goals for the Azzurri coming across the 1978 and 1982 tournaments.

Winner of the unofficial Silver Ball in 1978, Rossi also received the Ballon d’Or in 1982 for his efforts in Italy’s triumphant campaign.

Included in those 10 were the infamous ‘Hand Of God’ and more fondly remembered ‘Goal Of The Century’ against England, but that was just part of Maradona’s majestic tournament.

He was far and away the best player at the World Cup, and scored the only two goals in the semi-final win over Belgium.

El Pibe de Oro retrospectively won the Ballon d’Or in 1986, and was awarded the Bronze Ball at the 1990 World Cup.

Italy were knocked out at the last four of their home World Cup in 1990, but Salvatore Schillaci’s six goals were enough to win the Golden Boot and Golden Ball.

Schillaci found the net in all of the Azzurri’s knockout matches.

Winner of the UEFA Cup with Juventus prior to the World Cup, Schillaci was runner-up in 1990 Ballon d’Or voting to Lothar Matthäus. His international career was short-lived, however, as he didn’t play for Italy again after 1991.

Hristo Stoichkov and Oleg Salenko beat Romário to the Golden Boot at the 1994 World Cup, but the Brazilian was clearly the best player in the competition with five goals as Brazil lifted the trophy for a fourth time.

Coming off a Pichichi Trophy and La Liga win with Barcelona in 1993-94, Romário was one of the elite players in the world in 1994, and was retrospectively recognised as a worthy winner of the Ballon d’Or.

Winner of the Ballon d’Or in 1997, Ronaldo Nazário entered the 1998 World Cup as the best player on the planet.

The Brazilian lived up to the O Fenômeno nickname throughout the tournament until the final, when a convulsive fit hours before kick-off disrupted his preparation and naturally led to a subpar performance.

At his best, Ronaldo had unstoppable athleticism paired with trademark Brazilian flair and flawless technique. His four goals and three assists in the tournament only tell part of the story of his 1998 World Cup.

The only goalkeeper to win the World Cup Golden Ball, Oliver Kahn starred as Germany reached the final in 2002, pipping Ronaldo Nazário and South Korea’s Hong Myung-bo to the award.

Kahn finished third in Ballon d’Or voting in 2002, behind Ronaldo and Roberto Carlos, who both featured as Brazil defeated Kahn’s Germany in the final.

Der Titan conceded only one goal in the World Cup prior to the final, when he played through torn ligaments in his right ring finger.

Zinedine Zidane was integral as France won the 1998 World Cup, but didn’t finish in the top three of Golden Ball voting.

Seven years later, Zidane came out of international retirement to help France qualify for the 2006 World Cup, and again played a crucial role in Les Bleus’ journey to the final.

After scoring against Spain in the last 16 and assisting Thierry Henry’s winner in the quarters, Zidane’s penalty saw France past Portugal in the semi-finals to book a place in the final.

He converted another spot kick early in the final, but the match is best remembered for his infamous headbutt of Marco Materazzi which resulted in a red card.

France ultimately lost to Italy on penalties, with Zidane’s last match as a professional footballer ending with his head bowed as he walked past the World Cup trophy.

Forlán had won the Pichichi Trophy in 2009-10, and came into the World Cup in South Africa as one of the world’s best strikers.

Alongside two young forwards in Luis Suarez and Edinson Cavani, Forlán led a fearsome Uruguay attack, and scored in the quarter-final, semi-final and third-place playoff.

With Lionel Messi scoring four and assisting one during the 2014 World Cup, his selection as the Golden Ball winner was controversial. Argentina, however, made it to their first final since 1990, losing to Germany in extra time.

It wasn’t exactly a vintage run to the final for the Argentines, with just one goal scored in normal time during the knockout rounds.

Messi’s five goal contributions do not standout compared to other Golden Ball winners, but he created the most chances throughout the tournament, and provided a couple of moments of magic in the group stage.

Croatia defeated Argentina, Nigeria and Iceland in the group stage of the 2018 World Cup with Luka Modrić twice named Man of the Match.

The Real Madrid midfielder continued to impress in the knockout rounds, dictating play and creating countless chances for his teammates.

Also scoring twice in penalty shootouts, Modrić led Croatia to their first ever World Cup final appearance. While it ended in a 4-2 defeat to France, Modrić’s performances were enough to beat Eden Hazard and Antoine Griezmann to the Golden Ball.

Winner of yet another Champions League with Real weeks before the World Cup, the former Tottenham midfielder went on to break the Messi-Cristiano Ronaldo Ballon d’Or duopoly.