A study into 10 million suggestions gives a definitive answer to the age old question: Who sits on the NBA’s Mount Rushmore? 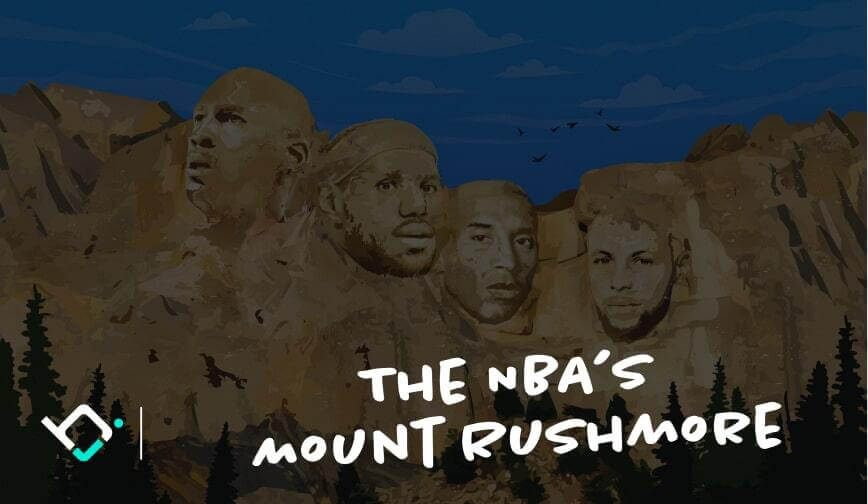 Throughout its 76 year history over 4,000 players have competed in the NBA, and with that many individuals to pick from, it’s difficult to narrow down the best of the best.

Despite this, in recent years it has become incredibly popular for sports fans to put forward their arguments for the greatest players (or GOATS) of all time. These debates are often tightly fought and many fans fail to agree on who is the very best. But in most cases, there are a few top players that are all supported. So, much like the beloved monument, fans pull together the top four players to form their own ‘NBA Mount Rushmore’.

With this in mind, Betting.com have compiled data from over 75,000 Reddit comments and close to 10,000,000 suggestions for the top four players, in order to settle the debate as to who should be carved in the NBA’s very own Mount Rushmore.

Top 20 NBA Players of All Time

The Fans’ Mount Rushmore – The Players

Probably not a surprise to most, Chicago Bulls star Michael Jordan comes out on top.  His 1,000+ game career has long cemented the six-time NBA champion as one of the greatest players to pick up the ball. Inducted into the Hall of Fame in 2009 and recent star of Netflix documentary ‘The Last Dance’, Jordan sits at the top of the NBA tree, with close to 1,500,000 suggestions voting him as the first face on Mount Rushmore.

King James comes in just under 30,000 votes shy of top spot. A trophy-laden career, with four MVP titles to his name, LeBron James is definitely worthy of second place on the list. Entering his 20th season in the NBA he continues to enjoy success with recent championship wins with the LA Lakers. With play like that will it be long before the King rules from top spot? In the meantime, he sits pride of place next to Jordan on the mountainside.

A lonely third for the late, great Kobe Bryant, a fair way short of the top two but a long way ahead of fourth. A 20 year career with the Lakers has meant he is written into LA folklore as a sporting god. The self-titled ‘Black Mamba’ finished his career with 14 All-Star appearances and four All-Star MVP titles, a title that was renamed in his honour after his passing in early 2020. As one of the most widely recognised players in the sport his place is fully deserved.

Arguably the greatest shooter in NBA history, the Golden State Warriors point guard has led a distinguished career to date with four NBA championships to his name already. With his career still in full flow, it might not be long before the 34 year old breaks into the very elite of basketball legends and not only takes his place in the top four ballers but possibly the greatest of all.

Best of the Rest

It may be predictable that Jordan, LeBron and Kobe made up the top three and a very popular Curry rounds out the Mount Rushmore of NBA players. But there are a couple of players who feel they should be fighting for a spot on that list.

In most sports over 1,500 regular season and over 200 playoff games played, not to mention topping the regular season total scoring charts, would earn you a spot in the top three. The man who twice had jersey numbers retired in his honour instead completes the top five.

The Celtics legend just misses out, but as an eleven time NBA champion and five time MVP his statistics speak for themselves. In many fans’ eyes he changed the game when it came to defensive play in the league, and as the first black head coach in the NBA,  his legacy is enormous. Had he been playing today he would be fighting it out for the top spot alongside Jordan and LeBron, such was his quality.

With over 2,500,000 suggestions the Lakers top four are certainly formidable. All four are inside the top ten greatest players and that’s without a legend like Wilt Chamberlain or the inclusion of LeBron James’ 200+ game spell. Playing nearly 4,000 games for the team over close to five decades they are arguably the best Mount Rushmore a basketball fan could ask for.

When you talk about a team with the most wins in NBA history you would expect a pretty legendary roster over the years. The Celtics don’t disappoint. Leading the way are Russell and Bird, two legends of the game totalling 1800 Celtic appearances between the two of them. Their undeniable quality, backed up by 1,000 Celtic appearances by Pierce and 15 time All-Star Garnett and you have a recipe for a great quartet.

Front and centre for the Spurs has to be Tim Duncan, 1,300 games and 450,000 suggestions as the greatest of all time, he definitely stands out as one of their finest. His supporting cast, with over 3,000 Spurs games of experience behind them isn’t too bad either. The other three teams listed here don’t come close to matching that volume of games played, the Spurs boast one of the strongest rosters of all the Rushmores.

No surprise the Miami Heat Mount Rushmore is dominated by ‘The Big Three’. James, Wade and Bosh brought NBA Championship success to Miami two years straight in 2012 and 2013, going on the third longest winning streak in NBA history at 27 games. Notably, Wade also helped to bring home the championship once before, alongside Shaq in 2006.

This data was collected using a scrape of Reddit threads discussing the terms ‘NBA’ as well as ‘GOAT’ or ‘Mount Rushmore’. This was then analysed for the frequency at which the names of players appeared in the threads. The more times a player was mentioned resulted in a higher ranking for GOAT status. To create the Mount Rushmore format the highest ranking players who had played over 350 games for their respective team.