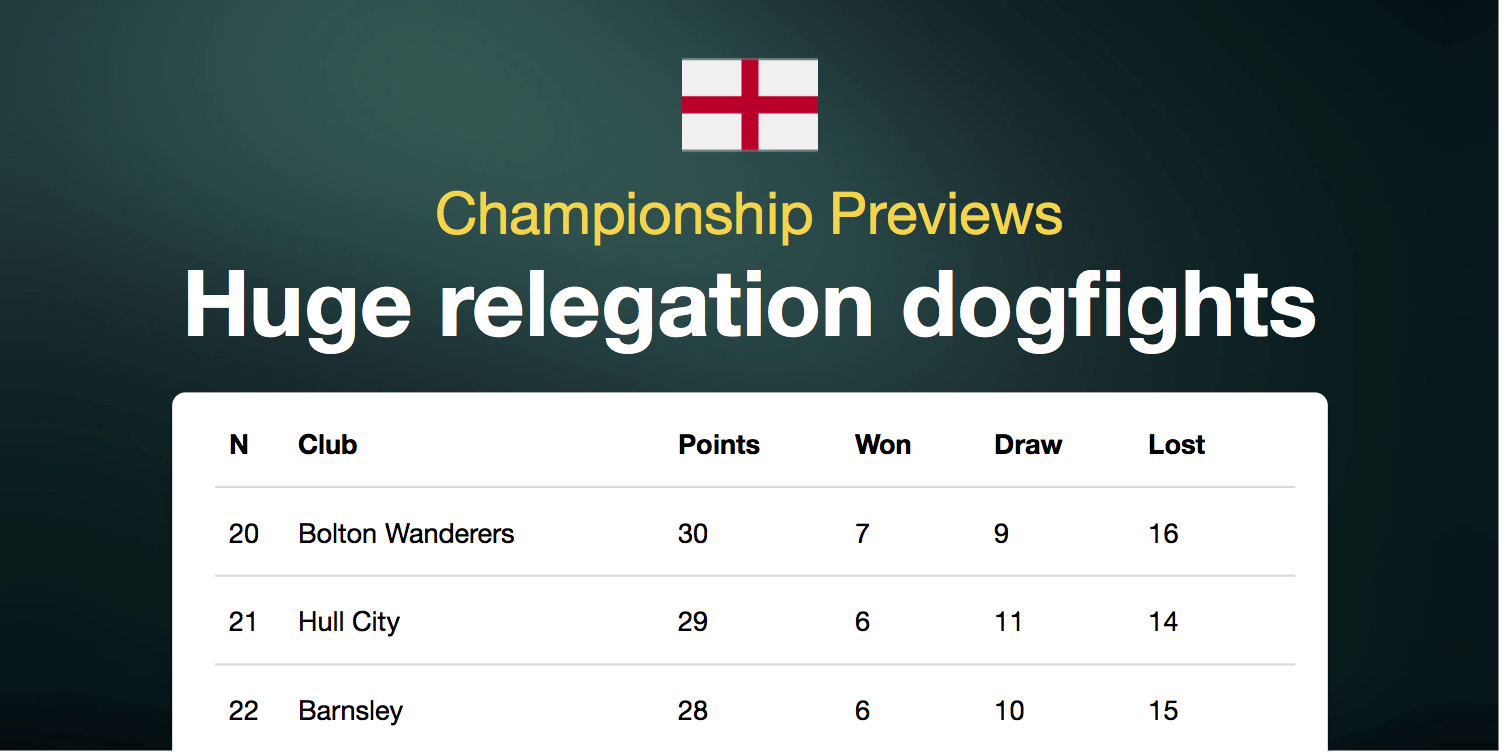 Midweek Championship action returns to our betting agenda in week 33, as Tuesday focuses on two huge relegation dog fights, and we have five of the division’s top six in action on Wednesday.

First up we’re at the Macron Stadium where Bolton can put a seven-point cushion between themselves and visitors Sunderland with a win on Tuesday. Sunderland’s heroic comeback against Bristol City a fortnight ago is now a distant memory following a dreadful performance in the 2-0 home defeat to Brentford on Saturday, and manager Chris Coleman has described this one as their “game of the season”. Both sides lost their top goal-scorer in the January transfer window – and the stats show that they’re struggling without them. Wanderers have scored just twice in the four games since Gary Madine departed for Cardiff, while Lewis Grabban’s exit from Sunderland has seen them score more than one goal only once in their last seven games. One goal might settle this one, and with that in mind, 15/8 for under 1.5 goals has a great chance.

Jose Morais is the new man at the helm at Barnsley, and his first assignment is a huge six-pointer against Burton Albion at Oakwell. Morais will be hoping to turn around the fortunes of a side that have only won once at home in their last 13 outings against an Albion outfit that are strong on the road against sides in the bottom half. Infact, the Brewers haven’t lost away from home against a side sitting outside the top six since October, so they’ll be confident they can get something in this one, and so am I. Only two of the Tykes’ last ten home games have seen over 2.5 goals, so Ladbrokes’ 8/13 for the same again on Tuesday are the sort of odds you’d expect, so throw in a Burton win there as well at a huge 13/2.

Now, what could be better than my FREE tips?! Well, free money of course! Check out our “Free Bets” section for any bookies you haven’t tried yet…

The race for the top two took another twist on Saturday as Aston Villa’s march towards automatic promotion was stumped by a 2-0 defeat to a Ryan Sessegnon-inspired Fulham. Steve Bruce’s side will be looking to put things right on Tuesday, but face a very tricky home game with Preston North End at Villa Park. PNE surprised many (but not me, find out why here) by holding leaders Wolves to a 1-1 draw at Deepdale at the weekend, despite playing most of the second half with ten men. That steel serves the Lilywhites well on the road, and this will be no walk in the park for the Villains. Every team chasing second place will go through a blip, and I think this might be Villa’s turn, so another draw to further halt their momentum looks a good bet at 9/4 with William Hill.

Sheffield United ‘s play-off push is wobbling thanks to a run of just one win in four, but if they could hand pick a home game to put them back in the top six picture, then they would probably have Queens Park Rangers high up on their wish list. QPR have only won away from home twice since this time last year, and while Sheffield United’s form at Bramall Lane isn’t great, 3/4 (Paddy Power) for a side to beat a travelsick QPR is in tip-of-the-day territory.

Another play-off hopeful that should be in your midweek accumulator is Middlesbrough, who face Hull City at the Riverside. Hull’s FA Cup defeat to Chelsea on Saturday laid all their problems out in the open: They can’t score, they’re confidence has been shot to pieces, and they have been ravaged by injuries in recent weeks. Looking at their fixture list, they have winnable home games against the likes of Barnsley and Millwall coming up, so they have bigger games like this one on the horizon, but this is a golden opportunity for Tony Pulis’ Boro. They can close the gap on sixth place with three points, and are 8/11 to seal the deal. Easy money.

Nottingham Forest will be hoping to score for the first time in nearly seven hours of Championship football when they welcome Reading to the City Ground. Times are also tough for Reading honcho Jaap Stam, who could be next in line for the sack if he doesn’t get anything here. A draw would edge both sides one point closer to safety, and with both teams struggling for form, under 2.5 goals looks a certainty too, so put them together for a healthy-looking 14/5 double.

Time now for a look at Sheffield Wednesday, who travel to Millwall on the back of a fantastic home win over Derby, and a commendable draw with Swansea in the FA Cup. The Owls are taking decent form to south London and they are also packing a great recent record at The Den, where they have won on three of their last four visits. However, it would take a brave punter to bet on an away side to take a maximum from one of the Championship’s toughest stomping grounds, as the Lions have lost just three times at home this season. With all those variables in mind, I’m going to be a touch conservative by taking the double chance of either a Sheffield Wednesday win or the draw, which looks like a strong bet at 8/11 as Millwall have drawn four of their last five at home.

Before we head to the Wednesday games, take a look at the other vital variables you need to consider before placing your football bets this week…

Wednesday’s four Championship games all have something massive riding on them. First up, table-topping Wolves are in action at Molineux against Norwich, who will arrive in the West Midlands on a high thanks to a last-minute draw against local rivals Ipswich on Sunday, and their away performances have been solid all season. This will be no walk in the park for Wolves, who looked short of ideas as they failed to break down ten-man Preston in a 1-1 draw at the weekend. I fancy the Canaries to get at least a goal here, and odds of 11/10 with Paddy Power for both teams to score is very big as far as that market goes.

The goals should also be flowing at Ashton Gate, where Bristol City host in-form Fulham. You would be forgiven for thinking that City’s surrender of a 3-0 half-time lead against Sunderland was a blip, but they were at it again on Sunday as they blew a 2-0 cushion at Leeds to draw 2-2. No such problems for the visitors though, who have won eight of their last ten games and are brimming with confidence. You’ve got to back form here, and if you think goals are on the menu, then back the Cottagers to win with both teams scoring at 17/5 with William Hill.

Wednesday’s televised game is at Pride Park, where Derby County will be looking to get back to winning ways when they face off against Leeds United. Too many draws since the turn of the year have slowed down the Rams, who could be four points off second place if Villa get their own way the night before. Leeds’ 2-2 draw against Bristol City was encouraging for new boss Paul Heckingbottom, but ultimately summed up why they’re not quite ready for a tilt at the play-offs. The Yorkshiremen also have a poor away record, scoring once and losing three times in their last four games away from Elland Road, and Derby have the kind of home record that should be too hot for them to handle. The home win in this one looks a snip at 4/5 with Ladbrokes.

Wednesday’s final game sees Cardiff travel to Portman Road to face an Ipswich side that were seconds away from a morale-boosting victory over Norwich on Sunday. A win for the Tractor Boys would’ve made them a totally different proposition for the visiting Bluebirds, but with their season now pretty much over, the victory is there for the taking for Neil Warnock’s side. Ipswich’s home form has taken a hit since Christmas, a period that has seen them win just once in five games on their own turf, including blanks against lowly Burton Albion and QPR. With all that in mind, Coral’s 12/5 for Cardiff to win to nil looks like my sort of bet.

Tip of the Day: Sheffield United should be making light work of a QPR side that simply can’t compete with the big punchers away from home. 3/4 for the Blades to cut through the Hoops is a great price.

Are you getting fed up of plugging figures into archaic Microsoft Excel? Here’s why we think Betting.com is the true haven for all your data needs…