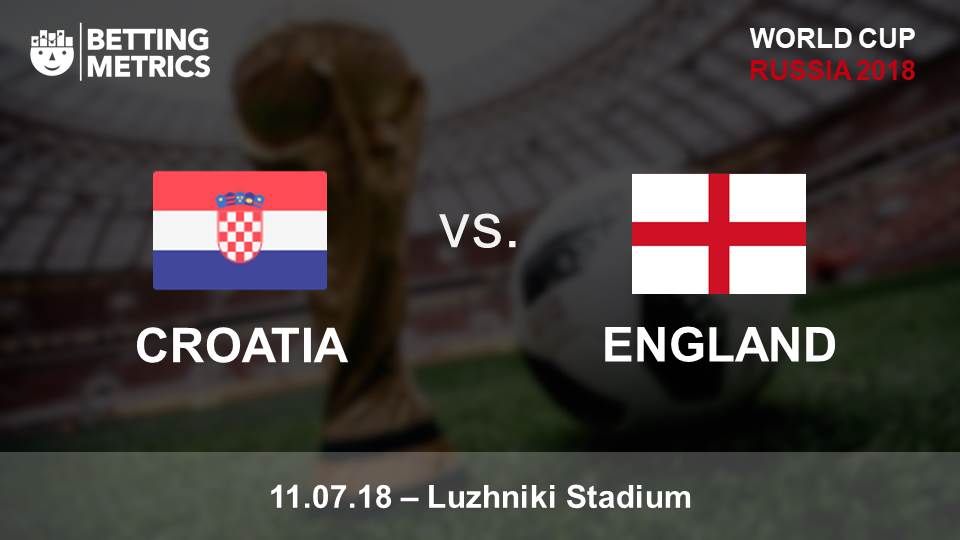 Croatia have had to negotiate two sets of extra time and penalty shootouts to make it this far, and a slightly fresher England may well be ready to capitalise and make it to their first World Cup final since 1966.

The form of Luka Modric is vital to Croatian chances of dominating the midfield, but can the Real Madrid maestro put it in three superb knockout performances together in the space of just ten days. Age is catching up on the 32-year-old, who rarely lasts 90 minutes for Los Blancos in La Liga.

The exuberance of youth could well see the Three Lions into the final. They love to pour forward, and represent a totally different threat to anything the Croatians face faced in the tournament so far. A pacey England side to score at least twice against a defence that has been unconvincing in the knockout rounds looks to have a great chance at 17/10 with Coral.

One of those goals could well come from Man City winger Raheem Sterling, who has done some “sterling” work in the final third, stretching opposition defences and creating space for the likes of Harry Kane to do damage. Sterling knows how to get on the end of things, scoring 23 goals for City in all competitions, so should definitely be considered as an anytime goal contender at 14/5 with William Hill.

Croatia should fancy their chances of nicking a goal themselves, with England having just one clean sheet under their belts so far, in their 2-0 win over a blunt Swedish attack in the quarter final. The “build from the back” tactics of Gareth Southgate’s men does lead to mistakes and the odd chance being given away, so both teams scoring has a great chance at 11/10 with Paddy Power.

This may be the patriotism talking, but England’s growth in the tournament has been great to see. They’ve worked their way through an ugly Colombian test, a penalty shootout for the first time in World Cup history, and their first clean sheet of the tournament last time out suggests all the stars are aligning at once. Harry Kane to score and England to win 1-0, 2-0, or 2-1 is my interest bet as I watch this one through my fingers at 4/1 with William Hill.

There are a few betting calculators out there, but find out which ones we think are the best.

In case you are not having an account with Ladbrokes yet they are having a great new customers offer England to beat Croatia 33/1.