The Norris Trophy is awarded to the best defenseman in the NHL, and most seasons it’s a very close race between a long list of players.

Betting on the Norris Trophy winner is a challenging task, but we hope to give you the right insight to make good value betting decisions. 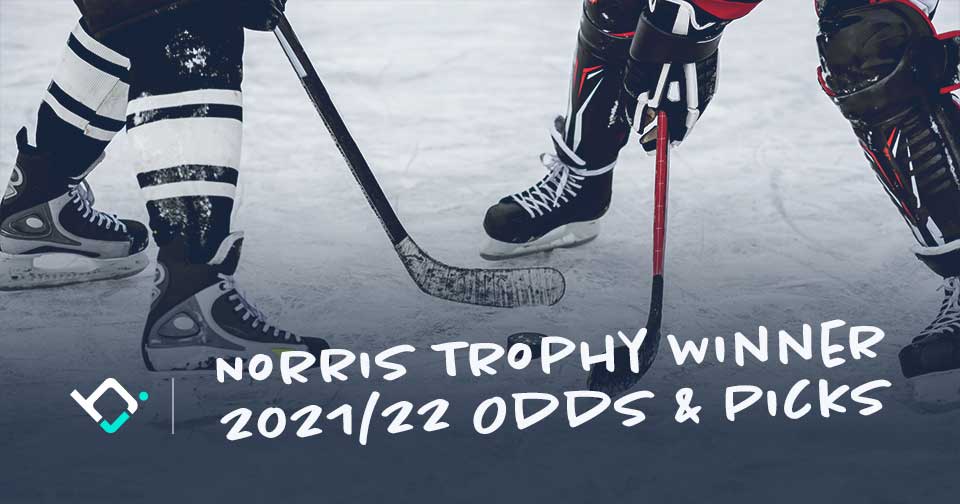 We will guide you through the favourites to win the Norris Trophy for the 2021/22 NHL season, but also to share our underdog picks who can offer great betting value.

With the Norris Trophy going to 9 different players in the 9 last seasons it’s fair to say that it generally is hard to pinpoint a huge favourite for the award. However, the 2021/22 season does have a few top picks that stand out quite a bit.

Will one of the big favourites receive the Norris Trophy at the NHL Awards in June next year? Or will we see one of the underdogs prevail?

That is the question we try to answer with our top picks for the Norris Trophy winner further down on this page. First however, let’s have a look at the current odds market.

All of the odds below are gathered from DraftKings. They offer a great amount of betting markets for NHL Futures, such as the Hart Trophy and the Vezina Trophy, which we have also reviewed.

They also offer a great sign up bonus and promotions, but more about that later.

+24 other options available at DraftKings

What strikes the eye at first glance on the odds market for the upcoming Norris Trophy winner is that there are unusually many young players in contention.

Two of the main contenders, Cale Makar and Adam Fox, are both only 23 years of age and the top trio is rounded out by previous Norris winner, and veteran, Victor Hedman.

An unusual situation as defensemen generally need more time before blooming out to superstars than their offensive counterparts.

Charlie McAvoy, Miro Heiskanen and Quinn Hughes are also players who have just had a few seasons in the NHL to develop, but they have all already proven their worth.

It is also noteworthy that nine previous Norris Trophy winners have the chance to expand their trophy cabinet with another award.

Let’s move on and have a look at our top picks based on the odds markets. We have selected three players from different odds brackets. One favourite pick with great chances to win the award, a value pick for the best return, and one longshot.

Our Top Picks for The Norris Trophy

Fox might not play for the best team in the league, and his stats might reflect that at times, but he alone puts his team on his shoulders most nights. These kinds of heroics win individual awards, and so do points – something Fox is guaranteed to deliver.

With both Cale Makar and Victor Hedman playing for main contenders for the cup, Colorado Avalanche and Tampa Bay Lightning, but being off to strugglesome starts to the season, makes Adam Fox our sole favourite for the Norris this season.

+550 is not the most attractive of odds, but for the reasons above, we do believe there is enough value to put a bet on Fox picking up the back-to-back.

If Fox manages to win the Norris Trophy, it would be the first time we have a repeat winner since 2006/2007, when a certain Nicklas Lidström won his 5th and 6th trophy.

The 31-year old Roman Josi is no stranger to being mentioned as one of the best defensemen in the NHL, and he won the Norris Trophy in 2019/20.

The Nashville Predators captain is once again highly likely to be involved in those discussions as we summarize the season next spring.

The team is also off to a surprisingly good start with 9-5-1, where Josi is a huge part of the success. If the Preds keep up a similar pace, then Josi might rise up as one of the main contenders for the Norris Trophy too.

It’s still early in the season, but Roman Josi for our money looks as THE best value pick for the Norris at +1000. He has all the ingredients to win his second Norris, and we will put our money where our mouth is!

The longshot pick was without a doubt the hardest one to make. With several defensemen still being able to get in the talks of winning the Norris when it’s all said and done, we still settled for Torey Krug.

The Blues are off to a hot start (8-3-2), and we expect them to continue delivering during the whole regular season.

Torey Krug is for our money the main man in a strong defensive line that also includes Colton Parayko, Justin Faulk and Marco Scandella.

Krug himself has produced 8 points (2+6) in 9 games, and with being the #1 choice for the Blues Power Play line, and being handed big minutes, we expect him to keep up production.

Get us right here – it is a LONGSHOT as the +3000 does imply, but with the Blues potentially just strengthening along the season, and Krug being the main man offensively, the chances are good he could be in the talks come June next year.

NHL Futures odds are provided by most of the big sportsbooks out there, but we have three strong favourites that we can highly recommend.

They all offer odds for ALL of the individual NHL awards, and they always have a great selection that includes all of the popular picks. Their odds are updated regularly, and will be so until the end of the regular season.

Not only that, but all of our three favourite sportsbooks for this purpose also offer a great sign up bonus, and always have on-going promotions that are of great value.