Betting on NHL futures is both entertaining and can lead to profitable opportunities with the right information.

The award for the most valuable player to their team in the NHL receives the Hart Trophy, and it’s for obvious reasons a very prestigious award. 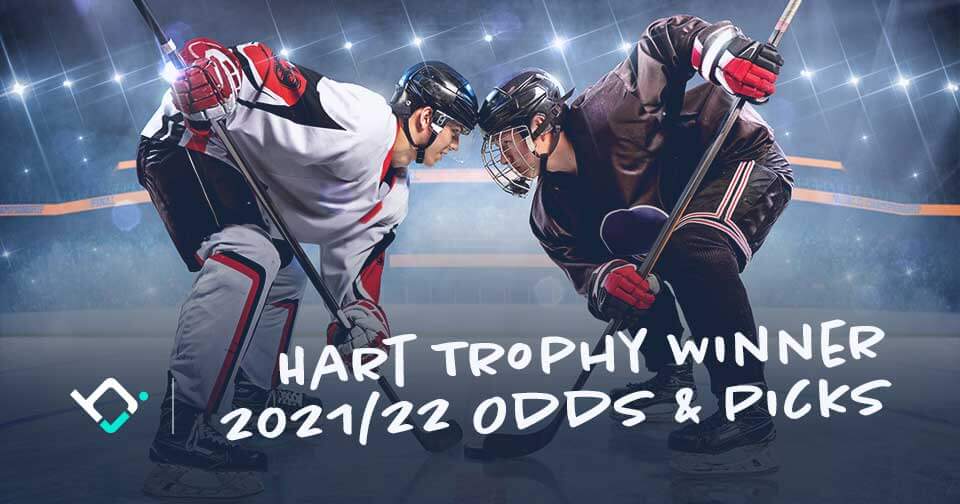 Our goal is to guide you through who the favourites for the Hart Trophy are for the 2021/22 NHL season, but also to share our underdog picks who can offer great betting value.

As has become almost tradition by now, the massive favourite to win is Connor McDavid. With a phenomenal career behind him already, and arguably being in contention with Wayne Gretzky and Mario Lemioux as the best offensive player to ever play the game, that surely is not a surprise to anyone.

Will Connor McDavid win the Hart Trophy for the second time, as expected by most? Or will we see a big surprise when the NHL Awards are being held in June next year?

That is the question we try to answer with our top picks for the Hart Trophy winner further down on this page. First however, let’s have a look at the current odds market.

All of the odds below are gathered from DraftKings. They offer a great amount of betting markets for NHL Futures, such as the Norris Trophy and the Vezina Trophy, which we have also reviewed.

They also offer a great sign up bonus and promotions, but more about that later.

DraftKings offers about 50 more options as the winner of the Hart Trophy, and also an option for the field, meaning anyone not listed. We have selected to feature a list as far down as we think it’s possible that the player actually has a realistic chance of winning.

The favourite to win the Hart Trophy needs no explanation, but we will discuss Connor McDavid just below. Let’s have a look at the competition to begin with.

As far as betting goes it has to be said that Draisaitl could be a great value pick. If (hopefully not) McDavid would miss out on some games due to injury or anything else, then Draisaitl is the massive favourite to receive the prize.

Even if that is not the case, Draisaitl could get involved in the race. The German plays on the same line as McDavid in their home games and the power play in normal cases. Outside of that he leads his own line in a great way, both in offense and defense. The question is if McDavid won’t get prioritized even if Draisaitl manages to outshine his team mate?

Outside the two Oilers superstars it gets tough to find real contenders. Players like Matthews, MacKinnon, Rantanen, and Pastrnak have all struggled somewhat in the beginning of the season, and so have their teams.

It would instead at this very moment (mid November) be suggested that the veterans, Alexander Ovechkin and Brad Marchand, could get involved in the talk.

The former especially has shown great form despite being 36 years old, and with 22 points (11+11) in 13 games, Ovechkin is a potential threat without a doubt.

Ovechkin has already won the Hart three times in his career (2007,2008 & 2012), and adding one at the age of 36 would certainly be quite the accomplishment. Right now though, everything seems possible for the sharpshooting Russian.

Our Top Picks for The Hart Trophy

Deciding the winner of the Hart Trophy last season was the easiest of tasks. Connor McDavid ended the shortened season with 105 points (33+72) in just 56 games. That’s unmatched numbers since the days of 99 and 66. Many believed it would never happen again.

What’s more crazy than that is that McDavid has managed to begin the 2021/22 season with the same pace, and there seems to be no end in sight.

24 points (9+15) in 12 games so far is a statement that needs no further explanation. McDavid is without a doubt the best player in the world, and arguably the best player ever.

Being 24 years of age and being compared to legends of the past is crazy enough, and one can just imagine where we will stand when we one day wrap up the fantastic career of Connor McDavid.

+150 for a player to win an individual award when we are only a bit into the season certainly is lower odds than what we are used to. However, with McDavid it makes complete sense, and only an injury would seemingly stop him from winning it back-to-back.

Realistically we feel as +150 is good enough to bet on at the current time, as the likelihood of McDavid not winning both the Art Ross and Hart Trophy at the end of the season are minimal. This excluding an injury along the way of course. So far the superstar has not however been very prone to injuries, and we are banking on a long and fruitful season.

The goal scoring machine just keeps on delivering, and the hunt for Wayne Gretzky’s goal scoring record continues for The Great Eight.

It also seems like Ovechkin does not know what the word age means, as he is still delivering just like in his prime. With 22 points (11+11) in 13 games played he is on pace to deliver one of his best seasons ever – at the age of 36!

The trophy cabinet is already full, with 10 (!) Maurice Rocket trophies, 3 Hart trophies, 1 Art Ross, Stanley Cup, and yes, the list goes on. With current form and the hunger to become the best goalscorer in NHL history, we can’t count him out of contention.

In case the Oilers hit a rough patch, or injuries come along, then we think Ovechkin is next in line as things are shaping up. He definitely beats out the other players with similar odds at the moment.

For +2000 we believe that Ovechkin is a great value pick, and also a fun one to follow along with!

NHL Futures odds are provided by most of the big sportsbooks out there, but we have three strong favourites that we can highly recommend.

They all offer odds for ALL of the individual NHL awards, and they always have a great selection that includes all of the popular picks. Their odds are updated regularly, and will be so until the end of the regular season.

Not only that, but all of our three favourite sportsbooks for this purpose also offer a great sign up bonus, and always have on-going promotions that are of great value.