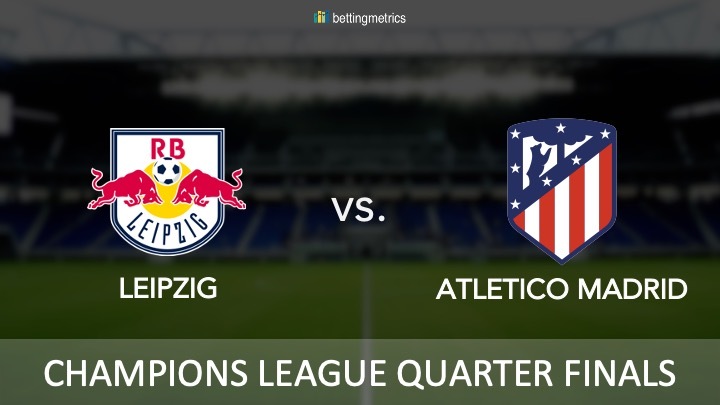 The game in question will be held on Thursday, August 13 at 20:00 at the Da Luz stadium, in Portugal, in a single match and at a neutral field like all the other challenges of this final phase. The two rivals have always had the role of pursuers both at home and in Europe, respectively closed by unbeatable teams like Bayern, Barca and Real. Only the Colchoneros have managed to triumph in the Spanish La Liga once, without ever being able to repeat it since 2014 to today. For the Germans sponsored by Red Bull, the balance is even more ominous given that the maximum achieved was a second place in the Bundesliga two years ago.

Leipzig have recently played a friendly game against Wolfsburg; another German team committed to Europe for this anomalous final of the season. At the end of the match, the result was the neutral 1-1, with goals being scored within two minutes: the advantage for Wolfsburg given by Steffen in the 70th minute was immediately answered by Schick thanks to a penalty being rewarded within two minutes of the goal scored. Leipzig has won its last game in the Bundesliga - a precious result that allowed the Red Bull team to ensure a Champions League place for next season. We trust that fact has a positive impact on the Leipzig players emotional status.

Atletico have been flawless after the resumption of post-Covid football, achieving the best performance in the entire Spanish scene. No defeats in the 11 played games in La Liga, with 7 wins and 4 draws they earned 25 points. In fact, at the resumption, the Colchoneros were on doubt for the next Champions League.

Strengthened by a winning mentality and awareness of their means, they finished third with 70 points, 10 more than the fifth Villarreal. The potential of Atletico to move forward is there, plus the fact that Cholo is a hammer in instilling motivation and determination. These will be the main cards with which they can win this tough Competition

Starting from all these considerations, we trust that Atletico is the more logical choice to place your bet. To support our decisions here are a few interesting facts:

Betting Tip by Betting.com: Away to win at odds around at 2.30

During a virtual press conference, the head coach of RB (Leipzig) Julian Nagelsman spoke to the media about the upcoming quarter-final match of his team against Atletico Madrid in the Champions League.

"Our preparation for the Champions League is going well. I am satisfied with the training sessions, and the boys are doing their best. Our training in Lisbon will not be tactical, but rather one that will keep us fresh so that we can enter the match strongly.

"We want to be ready to play a full 90 minutes plus overtime. We've already seen that the teams that played in the Champions League this week weren't 100% ready - it would be weird if they were," said Nagelsman.

German Bundesliga was the first of the major European championships which ended (excluding of course the French La Liga, which didn't get back on track by Federation decision). It's normal that all football fans and analysts expect a fresh physically well prepared team of Atletico and not that ready Leipzig.

A few days before the quarter-finals of the Champions League against RB Leipzig, Atletico Madrid suffered a heavy blow. The club confirmed two cases of coronavirus after tests performed on Saturday. The two infected have already been placed in isolation in their homes. According to Marca, one of the two is undoubtedly a footballer.

Later, however, it became clear that positive samples were given by starters Shime Varsalko and Angel Correa.This would be the only factor that could prevent Simeone from going out on the field with the best players he has on disposal

Next game for one of those two teams will be the Semi-final against the winner of Atalanta-Psg while for the other friendly games which should be scheduled.