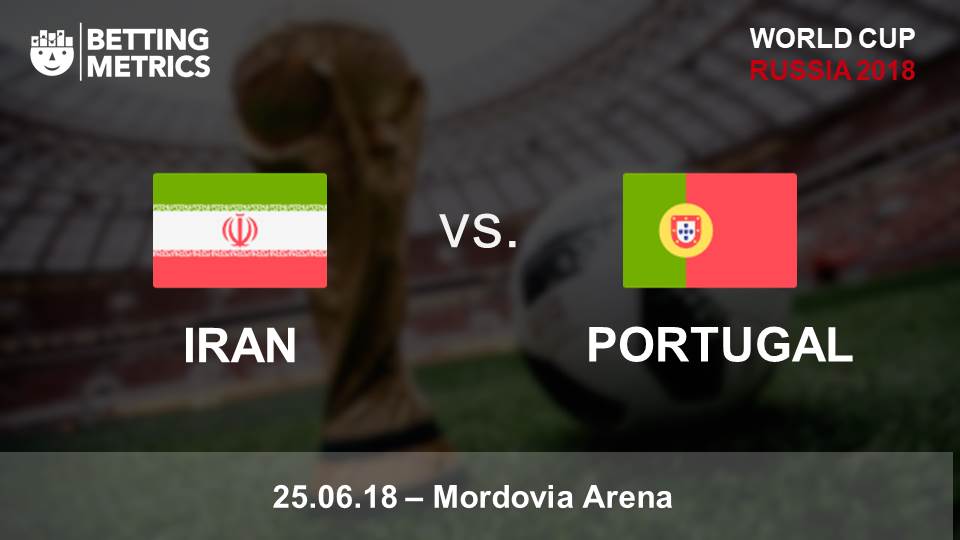 Iran were agonizingly close to pulling off a shock draw against Spain in their previous World Cup outing, but they will have to go one further and beat Portugal in order to qualify for the Second Round.

That should be a welcome scenario for the Portuguese, and particularly Cristiano Ronaldo, who thrived on the counter attack and created numerous chances against a Spain side that dominated possession. William Hill’s enhanced odds of 13/10 for Ronaldo to score anytime in a Portugal win looks like a decent shout, considering his side need a win in order to top the group.

Goals are the order of the day for both sides, so over 2.5 of them at 7/5 looks like great value. Iran need to go for it if they are to have any chance of qualification, while Portugal are locked in a goal difference battle with the Spanish. Whoever wins by the biggest margin in their respective final games will win the group and face an easier draw for the Second Round. Portugal to score at least twice is better than even-money with Coral.

The other half of me favours a tense affair with the Iranian favouring a cautious first half approach that sees them stay in the game, with a view to throwing the kitchen sink at Ronaldo and Co. in the last half an hour or so. A cavalier attacking approach inside a more condensed time period means greater urgency and more men being thrown forward in search of a goal, which should see the game open up nicely for Ronaldo to exploit gaps. I like the look of the double result of a draw at half-time and a Portugal win at full-time at 16/5 with Betfair.

The Iranians have had a great showing at the 2018 World Cup, but unfortunately this will be their time to bow out. Cristiano Ronaldo is a man possessed at the moment, and he won’t be denied his moments of potential glory deeper in the tournament. They will have to work hard for it, but a Portugal win with over 2.5 goals is the sort of bet that delivers the promise of an entertaining game in Saransk. You can get that one at odds of 39/20 with Sportingbet.

Are you a Fibonacci fiend or a martingale man? Take a look at what we think of the various staking methods out there and try some out.