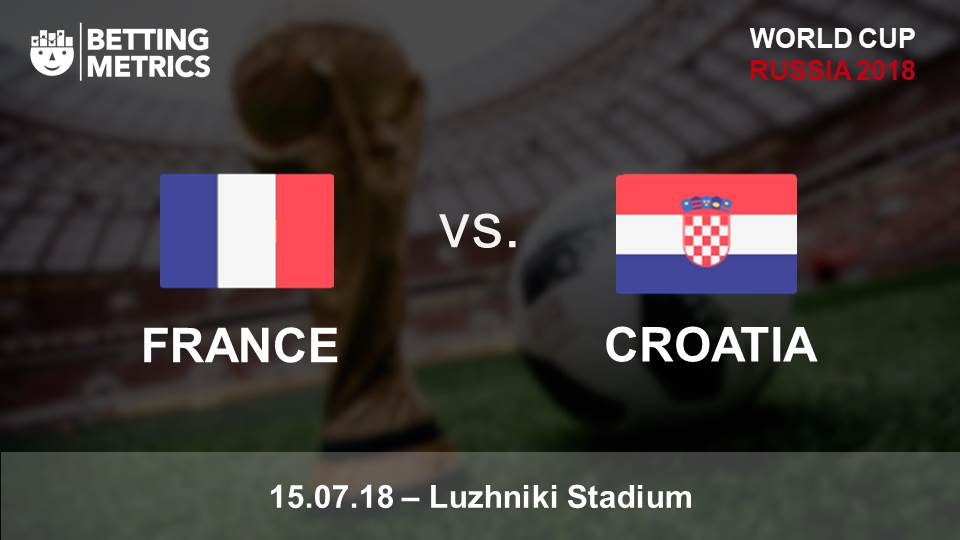 Les Blues look like overwhelming favourites to lift their second World Cup against a Croatia side that have played an extra game’s worth of football en route to the final in Moscow.

Those three lots of extra time will surely catch up with the Croats at some point, but they will be hoping that adrenaline will take them a long way in their first ever World Cup final.

France to make a quick start and get the opening goal looks a certainty at 7/10 with Coral. The French will be sharper and first to every ball, which should lead to some openings early on.

The Croatian defensive pairing of Dejan Lovren and Domagoj Vida really struggled to cope with the pace of England forward Raheem Sterling in their ultimately successful semi final victory, but in France they will face a deadly combination of pace on the flanks and a battering ram in the centre, in the form of Olivier Giroud. France to score at least twice has a great chance at 7/5 (Coral).

They do say you should back form, but my gut says that Olivier Giroud will have a field day against Lovren, and he should get plenty of ammunition with the creativity of Antoine Griezmann behind him. Giroud hasn’t had a shot on target during the World Cup, but he knows how to prove doubters wrong, so have a dabble on him to do the business in Moscow with a goal anytime at 23/10 with William Hill.

That said, you can’t completely discount the doggedness and midfield quality of Zlatko Dalic’s Croatia. In the central trio of Luka Modric, Ivan Rakitic and Marcelo Brozovic they have undoubted quality and experience, so this won’t be all plain sailing for Didier Deschamp’s side.

However, this will be the first time that Modric and Co. have come up against a midfield that is packed with energy and quality. N’Golo Kante and Paul Pogba are the perfect combination of technique and power in the middle, so we should be in for a purist’s dream in the middle third of the pitch.

The game will, however, be won and lost in both penalty areas. France showed great resistance to keep out Belgium in their semi-final, and have huge strength going forward, while you just can’t trust that Croatia defence. France to win the game in 90 minutes whilst keeping their third consecutive clean sheet is my side bet in this one at a lovely 33/20 with Coral!

Has this World Cup made you want to get into sports betting full-time? Check out our Inside a pro punter’s mind series and see if you’ve got what it takes.