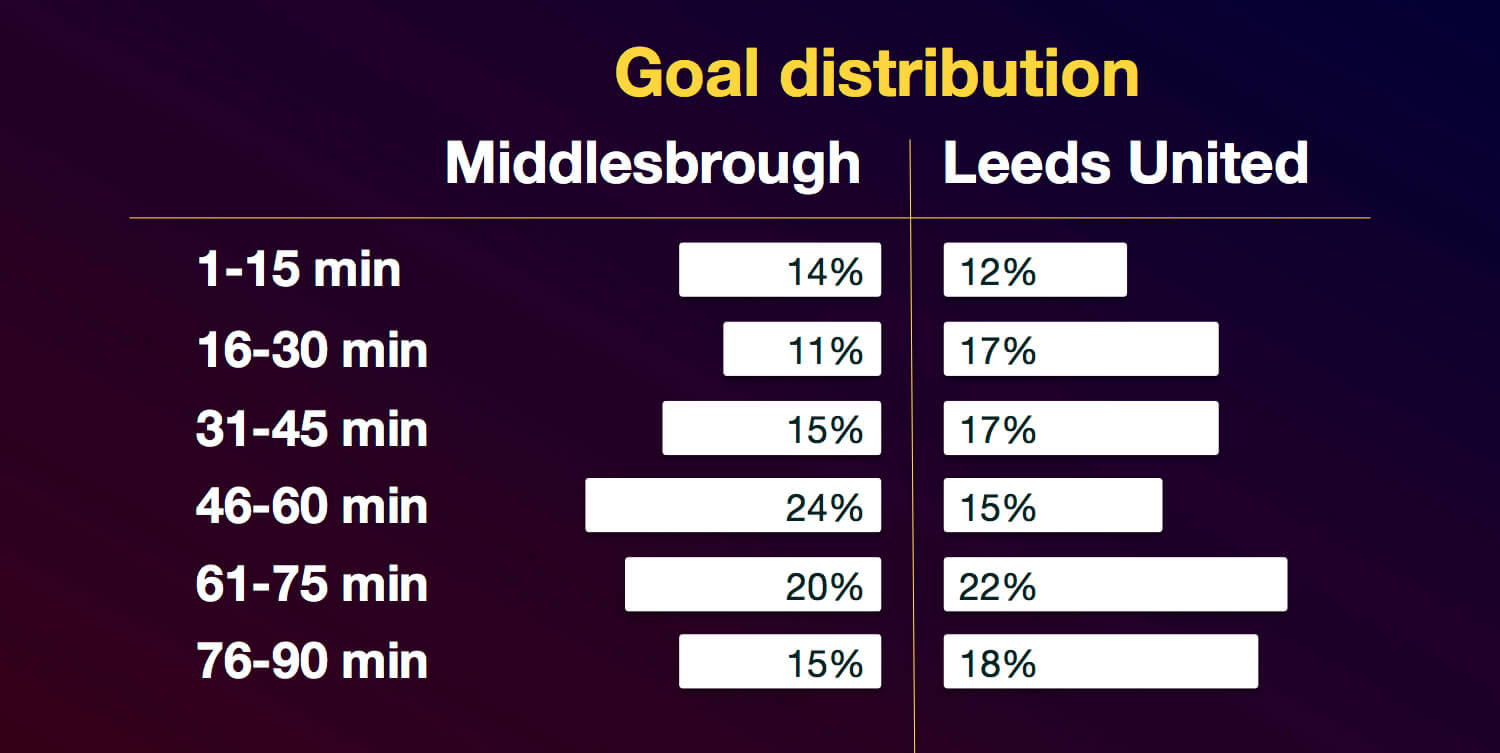 The Championship weekend begins, as it so often does, with a game on a frosty Friday night…

This time it’s the turn of The Riverside to host some early-weekend action as Middlesbrough face Leeds in what should be a decent match up. Boro have won back-to-back games at home following a tough spell on Teeside, while Paul Heckingbottom has enjoyed an encouraging start as Leeds manager, losing just once, and scoring in each of his four games in charge. If I had to pick a winner it would be a Middlesbrough side that need three points to take them into the play-offs going in Saturday’s fixtures, but Leeds’ mid-table mediocrity should add an element of freedom to their play. Both to score seems the logical route here, and Coral’s 21/20 for each team to bag a goal is extremely generous in BTS betting terms. Get on it now before the price drops.

On to the Saturday three o’clocks and we start off by taking a look at second-placed Cardiff, who have a tricky away assignment in form of a trip to Brentford, who still have optimistic eyes on a top-six finish. Two wins in six has dented the Bees’ play-off push, while Cardiff have hit form at the perfect time, notching four wins in a row without conceding, leaving them in the driving seat for automatic promotion from the Championship. If you fancy going with form and betting on Neil Warnock’s wily Bluebirds to make it five straight wins and clean sheets, then the best place to get it is Coral, where you can get odds as high as 9/2 for the win and shutout double. Lovely stuff.

Just a couple of places further down the table sees the game of the day in the Championship at Pride Park, where Derby County welcome Fulham. It’s not quite crisis stations just yet for Gary Rowett’s Rams, following a four game winless spell, but a match against Fulham would be the last thing they want to face this weekend. The Cottagers are flying. They’re unbeaten in 12 league games, and come into this one on the back of a comfortable 2-0 victory over Wolves. That sort of win is no mean feet, and it shows they have the firepower to beat anyone in this division, especially a Derby side that’s conceded seven in their last three games. Your money has got to be in on the away side in this one, and Ladbrokes have made the decision for you by offering great odds of 7/4 for them to come away from the East Midlands with three points.

Fulham’s form has swayed my decision here, but what else should you take into account when selecting your bets? Find out here.

A side keeping one eye on proceedings in Derby will be Aston Villa, who have an easy-looking game against Queens Park Rangers at Villa Park. There are very few certainties in life, but one of them is QPR not to win away from home in the Championship. The R’s have won just twice on the road in nearly 13 months, and that will play nicely into the hands of Steve Bruce’s Villa, who will be looking to put pressure on Cardiff with three vital points here. If you’re putting together an accumulator for the weekend, then 4/6 for an Aston Villa home win should be one of your first selections.

QPR were on the back end of a shock 5-2 defeat to Nottingham Forest last Saturday. By that logic, Aitor Karanka’s Reds should have no problem thumping at least ten past Birmingham City, who have looked devoid of any sort of confidence in recent weeks, losing four straight games without scoring. Forest’s goal glut last weekend was something of an anamoly, as they’ve only scored once in their last four league games in NG2. Throw all of those ingredients into the mixing bowl, and under 1.5 goals at 15/8 has a real chance.

Sitting a couple of places below Birmingham are Sunderland at the root of the Championship table. Chris Coleman’s side look doomed at the moment. One win in nine league games, and no away victories against top-half sides for the Black Cats since August is far from ideal form when you’re faced with an intimidating trip to The Den to face Millwall. The Lions would be just two points off the play-offs if the Championship was decided solely on home form, and they’ve converted that great record to their travels, where they have won four straight games. Every year sees a side make a last-minute dart for the top six, and this could be Millwall’s chance. 8/13 aren’t the best odds in the world for a home win, but will be a reliable leg in your weekend accumulators.

Sunderland sit five points adrift of 21st placed Barnsley, and the Tykes have shown some promising form following the arrival of new manager Jose Morais. After the Portuguese lost his first game in charge against Burton a fortnight ago, his side have gone on to secure a vital win at Birmingham last weekend, and a draw at Hull City that dragged them further away from the relegation zone. Barnsley host Norwich at the weekend, in a game that could go either way. At home, Barnsley struggle, and have won only once at Oakwell since mid-September, while Norwich are unbeaten in their last six away games. With that in mind, I’ve got to go with the form book in this one and take the Canaries win, but this will be an entertaining game with plenty of goalmouth action, so get on the away victory with both teams scoring at a massive 21/5 with Coral.

Reliability is certainty a trait you couldn’t attribute to Ipswich Town, whose inconsistency was underlined in black marker pen when they followed up a poor run of league form with a 1-0 victory at in-form Preston North End last Saturday. With the Tractor Boys now sitting just seven points off sixth-placed Sheffield United (whose game against Burton this weekend has been postponed), they have a great chance to build some momentum when they host Hull City at Portman Road. Hull recovered from a goal down to get a point against fellow strugglers Barnsley in midweek, and their record against this weekend’s opponents is more than enough to give them hope of a positive result. Nigel Adkins’ side have not lost against Ipswich in eleven years – a ten game spell that has seen them win seven times. Couple that form with Ipswich’s inability to string a set of good results together, and an away win at 21/10 suddenly looks very appetizing.

Sheffield Wednesday’s FA Cup exploits came to an end in midweek when they went down 2-0 to Premier League Swansea City. The Championship is back on the Owls’ agenda this weekend, but they may well be feeling leggy when they come up against an energetic Bristol City side that love to get on the front foot at Ashton Gate. This game pits two sides struggling for form. Bristol City have won just once in their last 13 games, and have drawn three of their previous four matches, while Wednesday have lost three games in a row in all competitions. With that sort of form, and the last two games between these two ending all square, I wouldn’t be surprised to see another stalemate. The draw pays 11/4 with William Hill.

We finish off with a look at leaders Wolves, who are going through something of a blip at the moment. No wins in three games shouldn’t be too concerning for manager Nuno Espirito Santo, but they will want to get back to winning ways as soon as they can if they want to storm to the Championship title. Visiting Molineux for Wolves’ latest Saturday evening kick-off are Reading, who probably wish this season would hurry up and end. Just two wins in 16 games is a stark contrast from last season, when Jaap Stam’s Royals made it to the play-off final. That’s not the form you want when you’re faced with a game against Wolves, who welcome back talismanic midfielder Ruben Neves to the side following suspension. A home win is very short at 2/5, so get a bit of bang for your buck by backing a clean sheet too, making a 23/20 double.

Tip of the Day: Fulham are on fire, whilst Derby’s form is looking a little damp, so 7/4 for Fulham to win away at Pride Park is a huge price.

Championship Treble: £10 on Villa, Millwall and Ipswich returns a lovely £85 with Ladbrokes.

If I don’t make you quite enough cash enough with my tips, check out the must-have tool if you want to follow a tipster and make some cold, hard cash.