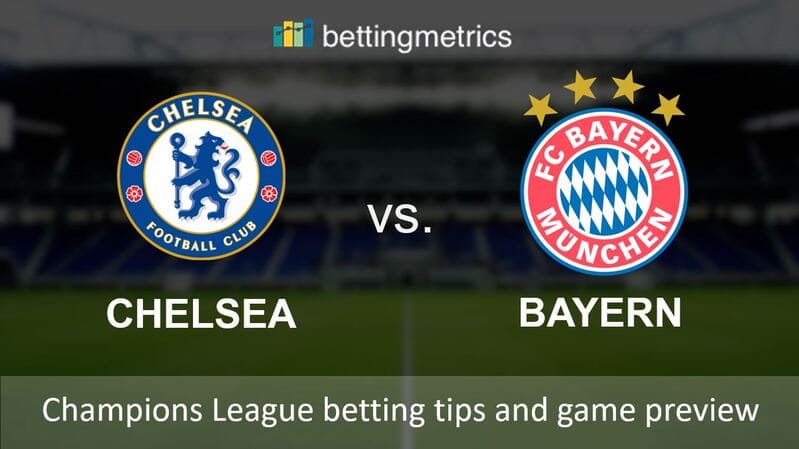 The second week of the Champions League 1/8 finals is here, and it promises to bring us a high level of great football emotions. One of the games that attract attention is between the game's host Chelsea and Bayern Munich. The repetition of the 2012 Champions League final (which Chelsea won by penalties) is waited by the whole football community, as both teams are highly motivated to reach the trophy this year. The experts' opinion points out that Bayern has better chances to go through the next round, and the team already started thinking about treble this season. Still, Chelsea shouldn't be underestimated as their major aim this year is namely the Champions League. The bookmakers' odds that you can find on our Odds Comparison are pretty generous for both teams, but it is noticeable that Bayern is the bookmakers' favorite.

Where the match will be played? - London - Stamford Bridge

One of the traditional English teams Chelsea is working under the leadership of its legend Frank Lampard. The squad is not with the same quality as in the past when Lampard has played with teammates like John Terry, Ballack, and Drogba. However, the coach managed to create a core between experienced players and skillful youngsters that are growing up in games like that with Bayern. Chelsea is at the 4th position in the English Premier League, 30 points behind Liverpool, and its major battle is for the Champions League direct places. The host advantage on the first game has to stimulate the players to show that they are able to fight with one of the biggest teams in Europe, and we are sure that players like Giroud, Barkley, Kovacic, and Willian could oppose Bayern's stars. If you think that Chelsea is capable of winning this game, you can find odds for that market around 4.50 on our Odds Comparison, which could bring you excellent profits.

Another year with high Bayern ambitions. 1/8 CL final, 1st Bundesliga's place, and 1/4 Cup final, makes it definitely clear why Bayern's fans are dreaming so much. The coach Hans-Dieter Flick calms players in the dressing room, and now the team's superstars are again motivated to win and play as best as they can. Bayern possesses players such as Lewandowski, Coutinho, Gnabry, Alaba, Muller, which can hardly be stopped even with extraordinary performance. The aggressive style of play that the team is showing and the quality of the players is the reason why the bookmakers and the experts think that the games against Chelsea are only a step to the trophy for Bayern Munich. The team won all of its group stage games, in which it scored 24 goals and received only 5. The bookmakers offer odds around 1.80 for Bayern's win, which according to us are quite high and not often provided for the German team.

The teams have played five games against each other. Bayern won two of the games, while Chelsea won only one. Two matches finished as a draw. The interesting fact is that all games (100%) ended with over 1.5 goals.

We admit that the game between Chelsea and Bayern is one of the most interesting in the CL 1/8 finals. Our opinion about the game is based on the fact that both teams will play more on the attacking side, while the defence will not be a priority. On the one hand, Chelsea could make their fans happy in its home field, on the other hand, Bayern plays each game intending to score as many goals as possible. That's why we think that the game will end with more the 2.5 goals scored. You can find odds around 1.60 for that market on our Odds Comparison.

Betting Tip - Over 2.5 goals at odds around 1.60 (which are available at the majority of the bookmakers).

Other tips and betting odds

We acknowledge the fact that many punters are not satisfied with only one betting tip provided. That's why we advise you to take a quick look at our Betting tips area, where our professional tipsters are publishing daily their tips. You can find a big number of valuable and well-informed tips, combined with great suggested odds. In addition, we are working with the top bookmakers that provide us with special offers for the Champions League. Today you can find boosted odds - 28/1 for Chelsesa or 7/1 for Bayern offered by 888sport for the game. Although the max bet is €/£ 5, you can significantly raise your betting bank with high odds like those. Keep in mind that we have boosted odds offers for different countries, so through our GEO locator, we will show you only the ones available for your country in order to maximise your profits.

The rematch between Chelsea and Bayern will be on Allianz Arena in Munich. Betting.com will support you with exclusive game preview and betting tips for the game shortly before it.