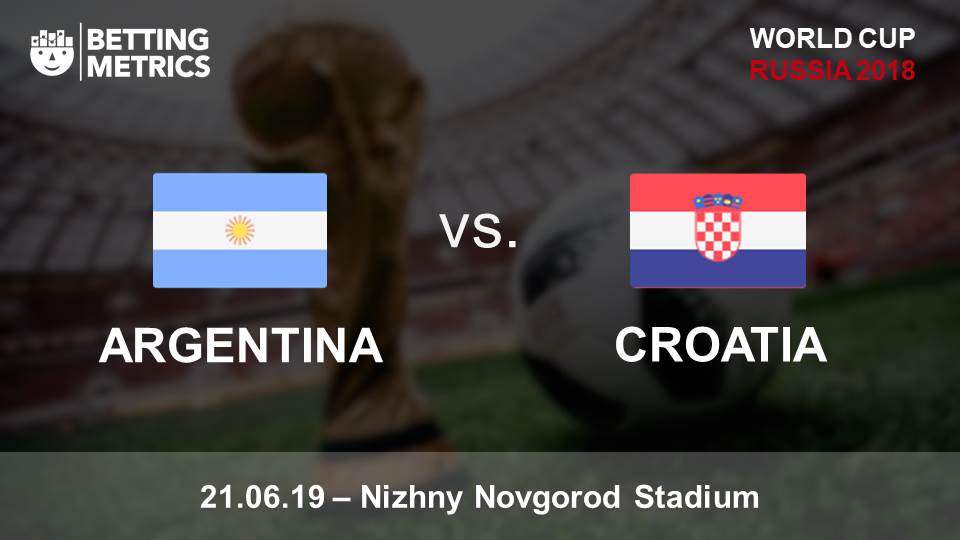 Argentina’s demons had something of a get-together last Saturday in their 1-1 draw against Iceland. A poor display from Lionel Messi, failure to break down a sturdy Icelandic defence, and a shocking goal conceded by their own backline saw all of Argentina’s weaknesses laid bare in that one game.

No such problems for Croatia, who went about their task of dismantling Nigeria very efficiently. They never had to move out of second gear against the not-so Super Eagles, and will be brimming with confidence as they look to take a firm grip on Group D.

Before the opening set of games you would have had both teams scoring down as a banker in this one, but maybe not now. Apart from Aguero’s goal and Messi’s (missed) penalty, Argentina lacked cutting edge against much-inferior opposition, and they face a tough test to break down the Croatians. However, it remains extremely difficult to back against them scoring, so give it a go with Ladbrokes at even-money.

Croatia are a massive 3/1 to win this game, and I’m scratching my head as to why. Argentina’s defence had its fair share of hairy moments against Iceland, so the likes of Ivan Persicic and Mario Mandzukic will cause all kinds of problems, and the midfield battle should be theirs, with Luka Modric and Ivan Perisic looking commanding against Nigeria. This is a great example of value betting, which you can find out more about in our Betting Knowledge blog, and you need to back it before the price inevitably drops.

And if you think there will be goals at either end, I recommend the very tempting bet of a Croatia win with both teams scoring, which is as high as 15/2 with Coral. Another bet to take a look at is the win with over 3.5 match goals, which is a massive 18/1.

The magnifying glass will be back on Lionel Messi in Nizhny Novgorod following his incredibly lacklustre performance against Iceland last weekend. The Barcelona man is not the type to have two bad games in a row, so is surely in line for a goal in this one. He isn’t usually better than even-money to score anytime in a match, but he is in this one, so get on it while you can at 21/20 with William Hill.