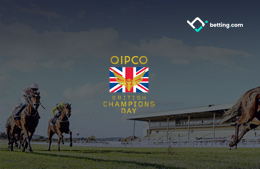 Skelton has the Paddy Power favourite

Okay, we’ve already had some decent races: the Charlie Hall, the Grand Sefton, the Haldon Gold Cup. Yes, we’ve seen Frodon putting it up to the Irish at Down Royal. All very nice and tasty hors d’oeuvres but not the main course. Cheltenham is that course, and its November meeting is where the jumps season really gets going.

First run in 1960 as the Mackeson Gold Cup, a name it retained until 1995, it’s had various sponsors since then. Murphys and Thomas Pink had short-lived associations. Paddy Power backed the race from 2003 until 2015. BetVictor took over in 2016, but Paddy Power returned to support it last year. The name may have changed but not the nature of the race. It’s fiercely competitive.

Trainer Dan Skelton looks to Protektorat to give him a first success in the Paddy Power Gold Cup. A winner of three of his five starts last season, including the Grade 1 Manifesto Novices’ Chase at Aintree in April, he’s owned by former Manchester United boss Sir Alex Ferguson in partnership with John Hales and Ged Mason.

Skelton has had this race in mind for Protektorat since the summer. He’s already won over the course and distance so can act on the track. Don’t be put off by it being his first start of the season. He’s done plenty of work at home and Skelton is confident of a good run.

Protektorat heads the betting at a best-priced 11-2 with bet365.

Skelton learned his trade at the feet of 12-time champion trainer Paul Nicholls. Maybe Nicholls trained his pupil too well, because he now presents an ever-present threat.

However, Nicholls has made a cracking start to the jumps season. A record 18 winners in October saw him reach 50 winners by the start of November. That’s something he’d never done before. He’s odds-on to make it 13 champion trainer titles in the last 17 seasons.

He’s double-handed in the Paddy Power Gold Cup, most notably with Lalor, who trades at 6-1 with Betfred.

It’s hard to know what to think – or expect – from Lalor. On his old form he’s well handicapped with 11st 5lb, but he hasn’t won for three years. He’s been pulled up on his only two starts since January last year. The nine-year-old has had well-documented problems and, on form, doesn’t stand a chance. However, this will be his first start for Nicholls, having been transferred from Kayley Woollacott’s stable in the summer.

Nicholls’ first move was to give Lalor a wind operation. He says he’s very happy with him and expects him to run well if the ground is not too soft.

Nicholls also runs topweight Simply The Betts, who finished sixth in last year’s Paddy Power Gold Cup but has not run since. Although he’s only 14-1 with William Hill , Nicholls reckons he’s harshly handicapped and may need a longer trip.

The first three from last year’s Paddy Power all hold entries. The Evan Williams-trained Coole Cody landed the prize in 2020, beating Spiritofthegames by 3¼ lengths, with Al Dancer a length further back in third.

Coole Cody bids to become only the sixth horse to land the prize twice, the last being Cyfor Malta in 1998 and 2002. Coole Cody was still a novice at the time of his win. A second-place finish on his reappearance in a handicap hurdle here last month should have put him spot on for this. He can be backed at 14-1 with bet365.

Spiritofthegames is Dan Skelton’s second string. He also made his seasonal bow over hurdles, finishing fourth at Newbury just last week. He currently trades around the 20-1 mark.

Al Dancer has only run twice since last year’s Paddy Power and was well beaten both times. He’s a general 7-1 shot. Those odds look on the short side as he needs to bounce back after a lengthy absence.

Aso, who finished seventh last year, represents Venetia Williams. He was flying too high in the Cheltenham Gold Cup and Aintree’s Betway Bowl but this is more realistic. He’s still high in the handicap with 11st 9lb to shoulder but can outrun his 25-1 odds.

Hobbs duo up for the cup

Somerset trainer Philip Hobbs has two entries, Zanza and Dostal Phil. They met in the Red Rum Handicap Chase at Aintree’s Grand National meeting in April. Dostal Phil finished third that day, seven lengths ahead of Zanza in sixth. They currently trade at around 14-1 and 20-1 respectively.

Zanza is now 4lb better off at the wights and has the benefit of a run this season. He finished third in last week’s Haldon Gold Cup at Exeter and will surely come on for that run. However, he comes with a warning, having never won beyond 2m 3f.

Fergal O’Brien’s horses are in flying form. He runs Paint The Dream, who will strip fitter than most. He won a handicap chase at Chepstow last month off a career-high mark of 152. That was his first start since finishing third in the Grade 1 Scilly Isles Novices’ Chase at Sandown in February. Jockey Connor Brace expects him to run well. At around 20-1, he looks rattling good each-way value.

Even trainer Nicky Henderson admits that Caribean Boy “can blow hot and cold”. However, he did look good when winning first time out at Newbury last year. Henderson reckons he’ll “win a big one when it all clicks,” but it may not be this one. Ladbrokes go a standout 14-1 about him doing so.

Sue Smith saddles Midnight Shadow, a 9-1 chance with bet365. He finished third in the Caspian Caviar Chase over this trip on Cheltenham’s New Course last December. He also ran third in Aintree’s Old Roan Chase on 24 October and should improve for that.

Further down the field

The bottom third of the 24 entries mostly look to be up against it. However, cases can be made for Richard Rowe’s runner Up The Straight and Venetia Williams’ second entry Farinet.

The pair met at Sandown in March, when Farinet beat Up The Straight by 6½ lengths. The latter is now 8lb better off at the weights so has a good chance of turning the tables. Both horses currently trade around the 20-1 mark.

There’s been some smart money for Brian Ellison’s Nietzsche. A general 33-1 shot two days ago, he’s now down to 12-1 with bet365 and others. He won a Listed handicap chase at Ayr’s Scottish Grand National meeting and has only 10st 3lb to carry. The big prices have gone but he could play a part in the race.

Ireland’s runners dominated the British at the Festival. However, they don’t have a great record in this particular race. They’ve only won it once in the last 40 years. Ireland’s sole representative this year is Denis Hogan’s Funky Dady, last seen finishing fourth in the Munster National at Limerick. He can be backed at a whopping 40-1 to become Ireland’s first winner since Tranquil Sea in 2009.

Protektorat 11-2 with bet365 is the selection to win. Paint The Dream looks the each-way value around 20-1.

It’s no secret that Dan Skelton is now focusing on quality rather than quality. The times when he dominated summer jumping are things of the past. If his winning tallies are down numerically, it’s because he’s looking for bigger fish to fry.

He looks to have two bankers in the novice chases. On Friday My Drogo will make his eagerly awaited debut over fences in the November Novices’ Chase (1.40). He looked a potential star in the making at Aintree in April after rounding off an unbeaten season with victory in the Grade 1 Mersey Novices’ Hurdle. He’s among the highest rated and most exciting novice chase recruits this season.

Not far behind him is Third Time Lucki, who bids to follow up his debut win over fences at the track in the Grade 2 novice chase over 2½ miles on Saturday (1.40).

Both will be odds-on so you won’t get rich backing them. However, there are three other Skelton-trained horses who may oblige at more rewarding odds.

On Friday, make a note of recent Carlisle winner Kayf Fernando, currently trading at around 8-1 in the Grade 2 Ballymore Novices’ Hurdle (3.30). That looks a big price.

Skelton has a couple of live chances in the two feature races on Sunday’s card. In the Grade 2 Schloer Chase (2.20), he runs Nube Negra, who bids to avenge his defeat by Put The Kettle On in the Queen Mother Champion Chase at the Festival in March.

Put The Kettle On loves Cheltenham and will take all the besting, while Paul Nicholls’ runner Politologue is another to consider. However, Skelton is confident of a good run from Nube Negra.

The Greatwood Handicap Hurdle (3.30) is always highly competitive. Skelton won it with North Hill Harvey in 2016. This year he saddles West Cork, who will need to defy a 631-day lay-off.

Skelton commented: “His form as a novice hurdler two seasons ago was very good. If he carries forward from a novice hurdler you have to give him a chance and on what I’ve seen I think that is possible.”

It would be some training performance and would put the seal on what could be a great weekend for the Skelton team.

UFC on ESPN: Kattar vs Chikadze - Betting Tips and Preview

With 2022 now upon us, it is time to re-enter the Octagon once more and although UFC 270 will appear on the horizon next weekend, fight fans can also look forward to caged warfare in just a few days’ time.

Need a break from Christmas over-indulgence? Well, there’s plenty of Boxing Day racing action to get your teeth into. It’s the busiest day of the year with eight meetings in England plus three in Ireland.

Premier League matches in jeopardy after surge of Covid-19 cases