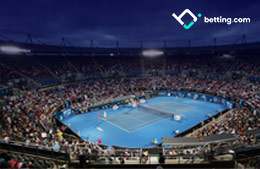 If you’re looking to bet on the ATP Cup 2022 from the UK, there will be many online bookies ready to take your bets. Consult our list below.

Must be 21+, playing within the state of Virginia. Gambling Problem? Call 1-888-532-3500. Not Valid with any other offer. Eligible clients are entitled to a maximum two (2) refunds. One (1) refund for first Fixed odds wager should it lose and one (1) refund for your first PointsBetting Wager should it lose. No refunds are payable for winning, void or wagers resulted as a push.
Popular

A customer's first deposit (min. $5) qualifies the user to receive up to $1,000 in bonus funds in the form of site credits that can only be used on DraftKings. Bonus amount is equal to 20% of that deposit amount, not to exceed $1,000 (the customer must deposit $5,000 to be eligible to receive the maximum possible bonus amount of $1,000). Bonus funds will be awarded to the user according to the following play-through requirement: for every $25 played on DraftKings in DFS/Sportsbook/Casino, the user will receive $1 in bonus funds released into their customer account (e.g., a $5,000 deposit requires a customer to play through a cumulative total of $25,000 in daily fantasy contests, sportsbook (-300 odds or longer), casino products, or any combination thereof to receive the maximum possible bonus amount of $1,000). Must be 21+, playing within the state of Virginia. Gambling Problem? Call 1-888-532-3500
Popular

Russia claimed the title at the second edition of the ATP Cup last February, and they are the favorites to defend the crown in a couple of weeks in Sydney. Led by the top-10 stars Daniil Medvedev and Andrey Rublev, Russia was the team to beat at both men's team competitions in 2021, standing above other countries in singles to lift the trophies at the ATP Cup and the Davis Cup Finals.

Medvedev and Rublev recorded eight singles triumphs from as many encounters in Melbourne in February to secure the crown for their country. The Russian duo stood strong at the second edition of the Davis Cup Finals in November and December, beating five rivals and dropping only one singles clash en route to the title.

Let’s suppose Medvedev and Rublev can show their A-game in Melbourne at the beginning of the new season. In that case, Russia should seize the second ATP Cup crown, especially if their doubles squad stands up and neutralizes possible singles failures. Rublev defeated Andy Murray in the Mubadala World Tennis Championship final in Abu Dhabi last December. He will try to carry that form into the ATP Cup and seek the defense of the title alongside world no. 2 Medvedev.

Given the current climate it’s hard to come by tennis odds on the ATP Sydney 2022, but there are bookmakers out there willing to offer prices on the different nations. One example is Novibet with odds on nations to win their respective groups. Their odds on group winners are as follows:

While it’s hard to find odds on outrights for this tennis tournament, we can assure you that In-Play odds will be readily available at all major bookmakers in the UK. We would suggest checking these bookies out:

It looks like the ATP Cup Sydney 2022 will be a star-studded event so let’s take a closer look at what the men’s tournament will look like.

According to the current entry list, 20 of the top-25 players will take part at the ATP Cup at the beginning of the new season, including eight from the top-10. The 20-time Major winner and the world's leading player Novak Djokovic will not lead Serbia for the third time, deciding to skip the team event and spend more time in Belgrade ahead of the Melbourne trip.

Alongside Rafael Nadal, Novak is the biggest name missing in Sydney, scoring every singles victory at the ATP Cup in the previous two years and leading his country towards the inaugural title.

Novak recently said he would focus on Majors, ATP Cup and Davis Cup Finals for the rest of his career. However, he will not defend the national colors ahead of the season's first Major, gathering more mystery over his Australian Open participation.

Novak had a marvelous 2021 season, winning three out of four Majors and barely missing a chance to secure the first calendar Grand Slam since 1969! In addition, the Serb passed Roger Federer's record and became the only player with 350 weeks as world no. 1, a number that will take some beating in men's tennis in the following decades.

World no. 2 Daniil Medvedev enjoyed a notable season that introduced him as a Major winner, becoming the second player born in the 1990s who achieved that after Dominic Thiem. Daniil won Tour-leading 63 ATP matches in 2021 and turned them into four titles, including the US Open and the Canada Masters.

Also, the Russian cracked the top-2 as only the fifth active player after Federer, Nadal, Djokovic and Murray. Medvedev lost the Australian Open final to Novak Djokovic before beating the Serb in the US Open title clash to embrace tennis glory and join our sport's immortals.

Daniil was a player to watch out for at the team competitions in 2021, dropping one set in nine encounters and leading Russia towards titles at the ATP Cup and the Davis Cup Finals. Without Novak in the draw, Daniil should be a player to go after in Sydney.

With both Djokovic and Nadal missing from their countries’ respective rosters it’s hard to not favour Russia to come out on top in this tournament. Daniil Medvedev will be spearheading the defense of the ATP title from last year and the 25-year-old looks ready to challenge Djokovic for the World No. 1 spot in 2022.

It’s difficult to see any real challenger to the Russians in the ATP Cup Sydney 2022. Our betting tip is to stick with the Russian team all the way through this tournament and look for some extra money coming from In-Play betting.

Constructed for the 2000 Sydney Olympic Games, the venue received upgrades and modifications to become a multi-purpose indoor arena in 2019. The stadium includes seating for 10,500 fans, and the new roof allows matches to go on in all conditions.

Qudos Bank Arena, formerly known as the Sydney SuperDome, is Australia’s premier indoor multi-purpose venue. Built for the 2000 Sydney Olympic Games, it can host up to 21,000 spectators and meet different sports requirements.

Tennis Australia chief executive Craig Tiley confirmed the official protocols, as all the players have to be fully vaccinated or granted a medical exemption.

They also must return a negative test in the 72 hours before flying to Australia. Players who have tested positive will need to complete an isolation period when deemed no longer infectious. They will be eligible to compete after that.

Organized as the ATP's first team event since the World Team Cup that went on until 2012, the officials announced the ATP Cup in the summer of 2018 and started working on it alongside Tennis Australia in November that year.

The first edition took place in Brisbane, Sydney and Perth in January 2020, gathering 24 teams and some of the world's leading players who fought under the national flag. Due to the coronavirus, the second edition of the ATP Cup took place in February 2021 and gathered a smaller field of 12 countries.

Instead of three cities, the complete action occurred at Melbourne Park right before the Australian Open. The third edition takes place in Sydney in January 2022, welcoming 16 countries and offering a chance for the players to shape up their games ahead of the season's first Major in Melbourne.